A Cornerstone of Community and American History

This grand old house has witnessed many important developments over time.

1890: The Ketcham farm is purchased by millionaire Alexander Campbell
a very prominent Dairyman who was the first to sell milk in bottles

THE KETCHAMS AND THEIR CIVIC DUTIES

David Ketcham was school commissioner and as such addressed Jamaica High School
while D.W. Ketcham was a trustee of Jamaica Hospital amongst a slew of other
community based vocations.

A Cornerstone of Community and American History

Our story of The Ketcham House begins in 1849 when a 23 year old ❶ David Ketcham who hailed from a very old and distinguished Long Island family made the long trek from his hometown in Dix Hill, Long Island to East Jamaica and purchased a farm with a single dwelling (the Ketcham House) from successful merchant Henry Henderson.

His wife Mary Oakley was then with child and in time a house was built just a stone's throw away for their son Aaron Oakley Ketcham (the A. Oakley Ketcham house). A. Oakley who would marry into another distinguished Long Island family and father two sons, Frank Lott and David Warren; both boys also grew up on the farm.

Grandson D.W. Ketcham was designated Chairman of the United Hospital Fund for a number of years in the 1930's and was consistently commended for his endeavors to bring improved health care to the community.

Today the UHF play an integral role in the fight against Covid. Check out their "Rise Up" tribute.

The Patriarch David W. Ketcham and his namesake grandson (who would become known as D.W. Ketcham) grew together and outlived all the other members of their little Hollis family. They continued the family tradition of service to the community and were outstanding contributors to all aspects of the civic, political, social and religious life of the community -- and the city as a whole. David Ketcham's family CV include: sat on town board of directors; grand jury members, draft officers, officials of local Grange, farming association board of directors member, school commissioner, founding members of church and church officers, firefighter, trustee of various organizations (hospital, bank, church, genealogy association, library), Bank of Manhattan officer, member of chamber of commerce, realtor, Lions club member ... among other designations.

The Ketcham farm became one of two farms that were used by ❸ Frederick W. Dunton. of the Long Island railroad development corporation for the creation of the Queens neighbourhood "Hollis".

The Ketcham House (along with the A. Oakley House) remained in the hands of the Ketcham family having been willed to grandson ❹ D. W. Ketcham .

Other residents of note are successful home builder/broker ❺ Charles Flores and his wife May Callahan [Flores] who was reputed to be the original "Gibson girl" and an outstandingly beautiful model who posed for "living pictures".

What are Living Pictures?

Miss May Callahan who lived with her husband Charles Flores in the Ketcham House until the time of her death in 1953 was reputed to have been a successful star of "Living pictures."

Tableaux vivants (or ‘living pictures’) were an extremely popular form of entertainment during the reign of Queen Victoria. They involved dressing up in costumes, using plenty of props, creating a scene from a story, and then staying completely still to hold the pose as a living picture! Source

The dairy king Alexander Campbell had intended to use the beautiful spawling land of the Ketcham farm as his local home base for dairy and living. His plans literally derailed as the property was ceded to the Long Island railroad and subdivided into lots appropriate to the newly formed town of Hollis. Campbell's plans for the farm were not realised, but other residents enjoyed the possibility of using the Ketcham House as home and business.

The property was occupied by florist ❻ John Gilkinson and his wife, and was then lined by impressive greenhouses on the 193rd street perimeter. Gilkinson sold to florist ❼ Florent Spiegeliere in 1912 and by the time famed historian and photographer Eugene Armbruster took a photo of The Ketcham House in 1923, the property was again up for sale by florists ❽ Anthony and Walter Manda. A development company acquired the property, relieved it of the greenhouses and trimmed the perimeter with houses and other buildings.

Broker Charles Flores and his wife occupied the home next; Mrs. May [Callahan] Flores passed away at home in The Ketcham House , in 1953. Flores retired to Florida in 1959 passing the home on to a new family by 1967.

Since that time, the Ketcham House has been owned by 3 other families before the present occupants made their home there in 1990.

On our gallery pages, you will discover newpaper clippings, excerpts from other publications, portraits and other images, and even obituaries highlighting the events that shaped the lives of all the individuals who helped to bring The Ketcham House to life. Click Next > or select from our article menu above to explore this gallery.


Newsmakers and the Ketcham House

Make a selection.   Click to zoom and scroll for easy reading. 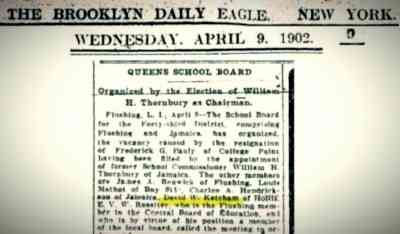 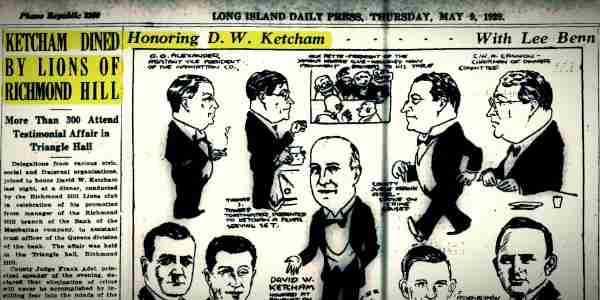 The Ketchams took their civic duties very seriously and played active roles in all the organizations that had community as their concern. They sat on various boards that governed the community, supported and developed their religious organizations and educational system. and D.W. Ketcham became a leading figure in his local Lions Club. Given the level of dedication offered by the Lions Club to the community, D.W. Ketcham was frequently revered in the press.